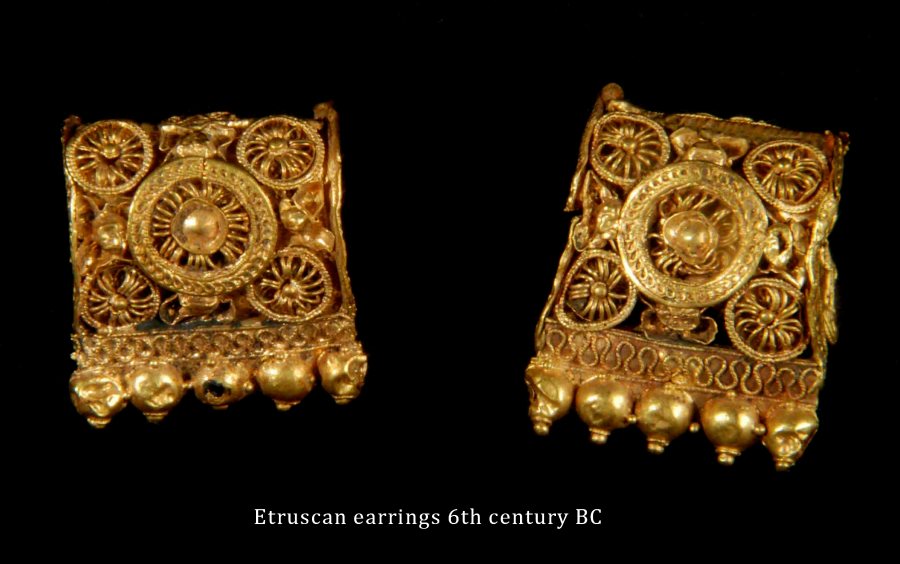 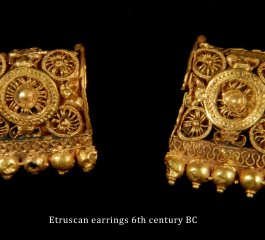 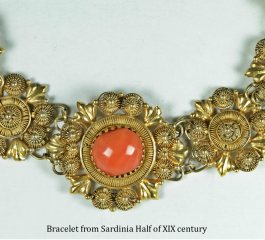 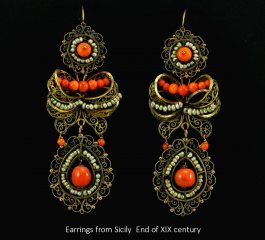 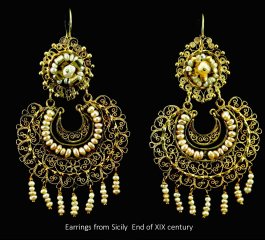 The word comes from the Latin “filum granum” i.e. thread grain which represents the form in which the filigree is made joining together very thin wires ( of gold or silver ) round, flat, twisted etc.. also with grains or other decorating elements.
This technique demands very high skills and precision from the goldsmith.
The filigree decoration can be flat or three dimensional and in this case can be named canetille (or cannetille) that is a close relative of the filigree work.
Canetille typically features fine wires or thinly hammered sheets. Motifs included tendrils, scrolls, coils, beehives and spider like ornaments. It was often embellished with granulation and thinly stamped metals decoration of all kinds.

Probably it is the oldest jewellery technique. The origin of the filigree is probably to be found in Lydia ( west part of Turkey ) around the 8th century BC. From there it spread to Greece and Etruria where was particularly fashionable from the second half of the 6th century BC.
This is confirmed by many tomb paintings at Tarquinia and by many beautiful ornaments now in museums :
Villa Giulia (Rome); Louvre ( Paris ); V&A and British ( London ).
It is necessary to point out that sometimes the filigree technique was used toghether with the close granulation and canetille techniques.
To be short, the Roman Empire widespread this fashion in many countries ( Spain, Holland, France etc..).
Then, in the beginning of the XIX century the neoclassical style in Europe renovated in jewellery the fashion of the filigree.
In France Napoleon; Pauline Bonaparte; Imperatrice Eugenie and Josephine etc… loved the filigree together with corals and different stones. In the beginning of the XIX century the famous Italian goldsmith Castellani used a lot this technique producing real masterpieces high priced by museums and collectors.
In Sicily and Sardinia in the XIX century we had a widespread popular use of the filigree in lovely earrings and pendants also with the Mediterranean coral and natural pearls.
Unfortunately all this finished in the beginning of XX century and today no more people is working the lovely filigree.